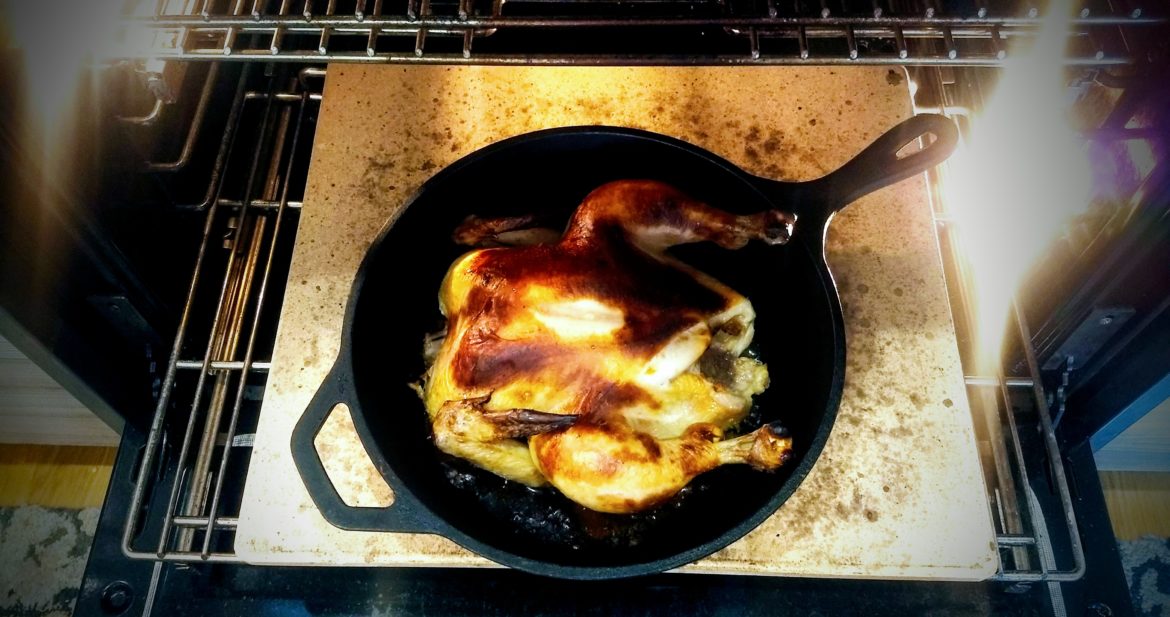 I’m not really a fan of chicken. Sure, there was that time I sat in my car in the Sam’s Club parking lot devouring a roasted chicken with my bare hands – that day, that time, that chicken, it’s actually a fond memory of mine.

Perhaps I don’t eat chicken because I used to raise chickens when I was much younger and watching how chickens are mass produced now turns me off, or could be my guy doesn’t eat chicken so we just haven’t eaten it in years and I lost interest in it or it could be that I really don’t find much flavor to chicken meat itself. So when a client recently requested I roast a chicken for her, I was apprehensive at best. But when we decided it would be Samin Nosrat’s buttermilk-marinated roast chicken, I changed my tune.

Have you seen Salt Fat Acid Heat on Netflix? Or perhaps you read the book? Samin is a chef, writer and a teacher who hit stardom with this first book, which then launched the 4-part video series. TRUTH – I haven’t read the book yet but I did watch the series. I, like most everyone else who has seen it, fell in love with Samin. She is so darn personable, engaging, believable and down to earth. And I truly love she is not a model and yet is so comfortable with…or rather, makes us all so comfortable around… food. Samin takes us on a culinary adventure and shows us food dedication and simplicity of eating while teaching us about each element. In the HEAT series, she makes a buttermilk roasted chicken that made me long to dig into a chicken again.

So I made the buttermilk chicken…even though I tend towards mostly dairy free. I followed the recipe to a ‘T’ and I watched anxiously through the oven door window as that chicken turned lustrously golden brown.

I was excited and my client LOVED it. Another TRUTH- the skin was amazing and the meat was moist, but it still tasted like boring chicken to me.

This made me want to try it again, but I wanted a version that was free of dairy. I began to wonder how coconut milk would work in place of the buttermilk. But why stop there? I wanted to add in spices and seasonings that would give the chicken more flavor and excitement.

I hosted a Garden to Table dinner on my Roofdeck and made two versions (using pasture-raised chickens of course!) – one with the classic buttermilk and one with my super-dope coconut chicken. Nearly everyone chose the coconut version- it was juicer and had more flavor.

Now I’m a little more lax on how I cook the chicken (leaving the wingtips on, forgetting to tie the legs together and skipping a 10 minute turn in the middle per Samin’s original recipe), but if you’re gonna cook chicken, this one’s definitely still worth the overnight marinade.
Happy Eating,
~Monique

Plan to marinate the chicken about 24 hours before cooking. Begin by salting the chicken with 2 tbls of salt and let it sit for about 30 minutes.

In the meantime, add all the remaining salt and ingredients into a gallon ziplock bag. Seal the bag and smoosh around until the salt is dissolved.

After the chicken has sat for 30 minutes, place it in the bag with the coconut milk marinade. Seal the bag and squish it the milk all around the chicken. Set this on a plate or pan (as a back up just in case it leaks or doesn’t get fully sealed), then place this in the refrigerator.

Toss and turn the bag from time to time until you are ready to cook the chicken; I did this exactly once.

1 hour before you plan to cook it, remove the chicken from the fridge and let it sit on the counter. Preheat the oven to 425 degrees.

Pull the chicken from the marinade and set in a cast iron skillet. Samin says to scrape off the milk and tie the legs together…. I *mostly* don’t do either of these.

Place the pan in the oven with the legs facing the back left corner of the oven. Roast for 30 minutes. Turn the oven down 400 degrees and turn the pan so the legs are facing the right corner of the oven. Roast for another 30 minutes or more as needed; the chicken will be super bronzed. Test by checking the temperature with a meat thermometer (165) and/or the juices should run clear when you insert a knife between the leg and the thigh.

Remove from the oven and let rest for 10 minutes before carving.

Note: Try grilling the whole chicken; the flavor is fantastic. Set the two outside burners to medium high and keep the internal burners off or at very low, whichever helps you keep the temperature of the grill near 425 degrees. Follow the same instructions as the oven.

Note: The marinade is very salty. I boiled it down once hoping to use it as a sauce, but it’s really just too salt. However, I did toss about 1/4 cup of the boiled marinade with a pot of plain black rice and it actually seasoned it perfectly!

Remembering how far you've come can be ...