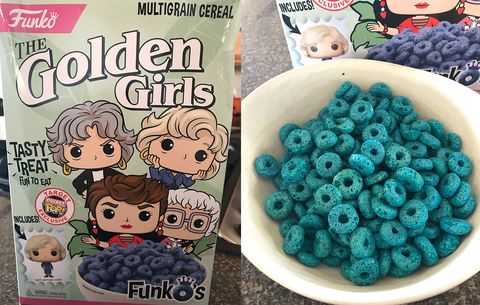 I absolutely watched The Golden Girls – don’t judge! Four women living together as friends and family amid clashes, strong wills and lots of cheesecake and sex, those spunky women took on serious topics which I didn’t even realize at the time. I also didn’t realize the characters weren’t actually that old now that I’m closing in them. I can’t remember what I had for breakfast but I can still sing that theme song.

But as much as I liked the show I can’t get behind the new Funko’s Golden Girls cereal that has just been released by Funko. (Funko is one of the leading creators and innovators of licensed pop culture products. They have more Funko’s Cereals planned as well, like Buddy the Elf, Elvira and PacMan.) 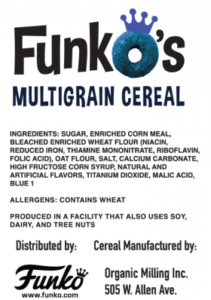 Truth is, I’m not a fan of ANY breakfast cereal. Let me break down why.

Ingredients are always listed most to least on packaging. Take a close look at this one, the first ingredient is actually SUGAR. ——-> I shouldn’t need to say anything more, except that also notice the high fructose corn syrup (HFCS) as well.

Added sugar is making us fat and unhealthy. HFCS is an industrial food product far from natural that can literally punch holes in our intestinal walls. Dr Mark Hyman has a great article on it here.

Deceptive Labeling &  Genetically Modified Foods:  Food manufactures have been duping us for years by using terms like ‘natural’ (which isn’t even regulated) to mislead us into believing a food is free from harmful ingredients. Most breakfast cereals were found to contain cancer-linked glyphosate, which is the main ingredient in Roundup Weed Killer. The World Health Organization has determined that glyphosate is probably carcinogenic to humans.

Even taking a step back and looking at the title of the cereal. The word ‘multigrain’ is front and center and gives a feel-good sense that it’s good for you, right?

Highly Processed Grains with Artificial Colors and Additives: Cereals are made from highly processed grains. You’re basically starting your day by spiking your blood sugar and insulin levels, which will crash a few hours later causing the body to crave another high-carb meal. This starts the vicious cycle of overeating.

Take a look at the color it this cereal. I’m not even sure what color that is…except perhaps ‘blue haired lady’ blue on steriods. Definitely not a normal, nor natural, color. That color isn’t from blueberries but rather from Blue 1.  The artificial colors and additives contain compounds that research has linked with cancer and problems in children ranging from allergies to hyperactivity to learning impairments. Are those colored fruit loops really worth it??

The bottom line is that cereal isn’t a food, rather it’s a ‘food product’ that isn’t fit for human consumption. I know we’ve been told it’s good for us, but let’s be honest- the food industry has ferocious marketing teams whose job is to sell cereal.

Of course, I’m hoping most people are buying this particular cereal as a novelty and for the mini figurine inside, not to actually ingest the product.  Yes, I ate it cereal as a kid but wouldn’t touch the stuff now and hoping you are ready to move on from breakfast cereals too.

I will tell you, if you haven’t played the Golden Girls Clue yet, I highly recommend it. Just be on the lookout for Blanche in the lania with the whipped cream!

Thank you for being a friend,