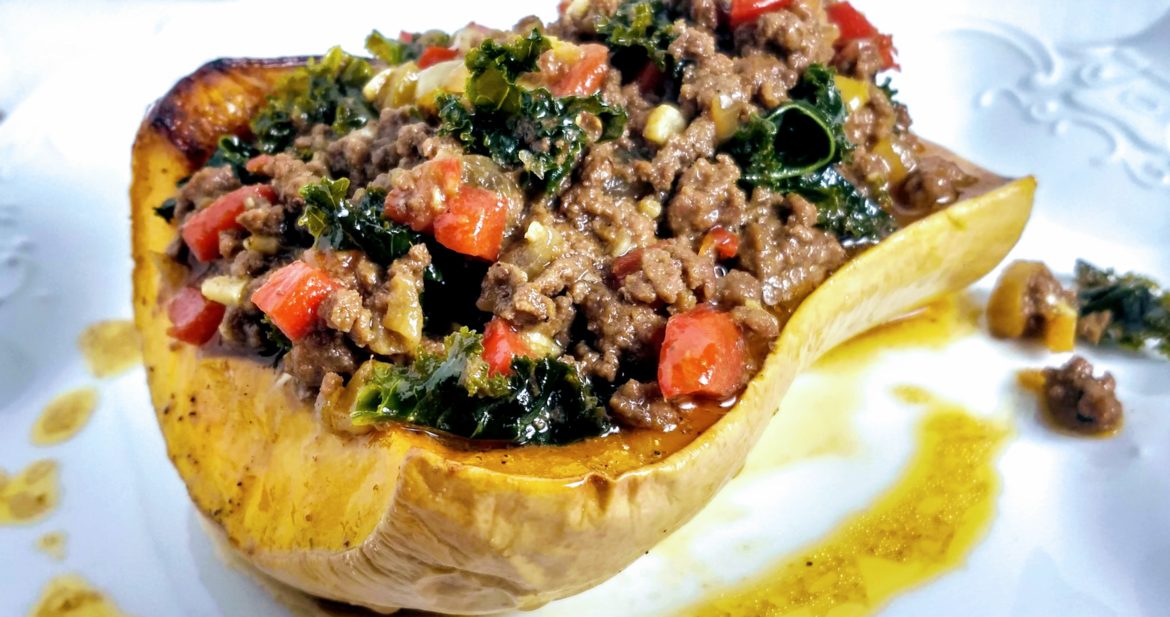 Have you tried bison meat? It carries more nutrients than your average beef and the taste is so much richer and interesting. Plus bison is usually free-roaming and grass fed, not grain fed while smooshed in a small indoor pen. Read: HAPPIER.

You could toss this curried bison stuffing over any roasted squash. I also happened to have a whole pan of simple salt and pepper roasted veggies consisting of a bunch of chopped root veggies (like carrots, celery, onion, potatoes, etc) so we ate part of the bison filling over those too and it might have been even more delicious. Love when food becomes versatile!

However you decide to eat it, it’s hearty and protein rich so will keep you going for hours.

Preheat oven to 400 degrees. Cut the squash into two, scoop out the seeds and guts. Rub with a little olive oil then dust with a bit of salt and pepper. I also added a light dusting of ground cumin and coriander for a little extra flavor. Set the squash on a sheet pan and roast until fork tender (about 45-60 minutes.)

Saute the bison filling while the squash is cooking:

Heat the oil over medium heat in a large skillet. Once hot, add the chopped onions and peppers. Saute until they begin to wilt, about 5 minutes.

Add the bison to the skillet and cook until nearly browned throughout. Add in the garlic, kale, curry paste, garam masala and salt. Toss well, reduce heat, cover and let simmer 10 minutes.

Add the coconut milk skillet and simmer another minute or two with the cover off until the milk forms a bit of a ‘sauce’. Taste, adjust seasonings if desired. Remove from heat and cover.

When the squash is ready, scoop the bison mixture onto the squash and enjoy while warm.

1
Previous Post: « I’m making dirt a part of my diet, and you should too!
Next Post: Here’s why you need to wash your veggies »