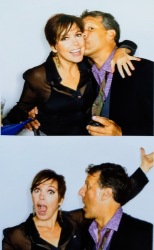 Over the past 6 months I cut my hair 4 times (see the changes below). I’ve know for a while it was time to let it go, but I kept coming up with excuses-

Truth is that I was a wee bit scared. It has been well over a decade since I had really short hair and I’ve aged a bit since then …could I really pull it off? Plus there would be those people who would say “What did you do?” or ‘Why?”

So I started small (semi-small). I chopped off 11 inches, then another 3. And then another inch. Still not satisfied, I made a split decision and went all pixie! And it’s super fun and I’m glad I did it.

Maybe I was using all that long hair to hide behind, perhaps it was even a security blanket in a way. It was familiar even if it wasn’t always comfortable. Yet deep down, I knew I wanted to start fresh. But that meant change. And change doesn’t just affect us personally, whether we like it or not it affects everyone around us.

I knew that there will be that shock value when someone sees my hair for the first time after a new cut (which draws more attention!) And there will always be those who don’t like it. But life can’t be about pleasing others over yourself.

I’m not saying everyone should go cut off all their hair; but is there something you’ve been wanting to do that you just haven’t had the guts to? Perhaps it’s to quit your job and start a business. Or to take a vacation by yourself. Or to give up eating meat, or become a farmer, or ask that one guy in your building out. We all have these desires and dreams, but not very many people act on them.

Do you find yourself repeating the same excuse after excuse? Is there a deep desire that you just haven’t fulfilled? Stop waiting. Stop making excuses. Stop stopping yourself and go for it – which is often easier said than done. It’s not about just having the guts to do it but rather to embrace change slowly.

Here’s a few tips that have always helped me:

1. Just do one thing. One small thing towards your goal.
For me, it was the initial hair cut. Then I kept building on that. Maybe you want a new job- perhaps just creating a resume is your first step?
Basically break down the larger goal into small, achievable steps. It will be less daunting and allows for acceptance along the way.

2. Change isn’t always a straight line.
It’s cyclical. One step forward, two back then forward again. Let’s say you are quitting smoking and on day 1 you had zero cigarettes but day 2 you had 8. Strive to have one less on day 3 than you did on day 2, then build on that.

3. Allow yourself to change and grow.
I had a client who refused to admit the changes and strides he made on his lifestyle and continued to talk himself down and not allow himself to acknowledge the good. Yet the really interesting part was that his family and friends actually witnessed the changes he was making! You will only go where your mind allows you. Are you limiting yourself or are you open to change?

4. Reduce expectations.
If there is one thing I have learned from yoga it’s that you can’t always expect everything to be 100% all the time. We don’t change by leaps and bounds every single day, with every single posture. Slow and steady always wins the race. That doesn’t mean to say you have to lower expectations in the long run, but rather modify to allow for small goal efficacy (see #1 above).

5. Enjoy the ride.
Have fun along the way. If you are always racing to the next moment, what happens to the one you’re in?

6. You can always undo (or modify).
With hair- well it will eventually grow back, or you can wear lots of hats, have fun with wigs or get hair extensions. If you move and don’t like it, you can move back. If you start running and decide it’s not for you, you can change that and try cycling or pilates.
Even if you can’t undo, be open to modifying. Not every step in your change process is going to be the best ever; most of the time we have to adjust or tweak along the way. Plus remember that our initial goals and wants do change as we grow too.

This probably goes without saying, but this last tip carries an important caveat: you don’t want to burn any bridges along the way. Don’t march in your boss’s office, quit on the spot and tell them they suck before you have found that new job, or ever really. That *could* be hard to undo.

What if you stopped saying ‘someday’ and instead said ‘I did it’? For many of my clients, it’s more about the idea of change than the actual change itself.

Just keep asking yourself- what is it you want to achieve and what is one thing you can do towards that goal?

For fun, here’s a few shots of the many phases of my hair over the past few months:

0
Previous Post: « Monkfruit Sweetener
Next Post: Is your quest for a healthy holiday ruining it for others? Two step process to satisfying everyone. »